latest
from the blog Hello and welcome to our monthly news recap, a column where we provide our readers with an overview of the most relevant news and events that happened within the digital marketing landscape over the last month or so.

Let’s see what September 2020 brought us:

Now, onto the news!

Oracle won the deal with TikTok, Chinese video-sharing social networking service owned by ByteDance, against tech giant Microsoft by a hair’s breadth. Interestingly, there was a significant difference in the purchase conditions – instead of buying off the whole company, Oracle will become a “trusted partner” for TikTok.

The news came only an hour after ByteDance declined the offer by Microsoft for US, Australian, Canadian, and New Zealand operations.

This might be a win-win situation for both parties since ByteDance keeps its share in TikTok, while on the other hand, Oracle is in good standing with the US government.

It finally happened – Facebook has decided to remove its 20% ad text limit for all ad images.

There was no public announcement though – instead, Facebook started sending notifications that what buyers all over the world noticed in the previous few weeks wasn’t a stroke of good luck: 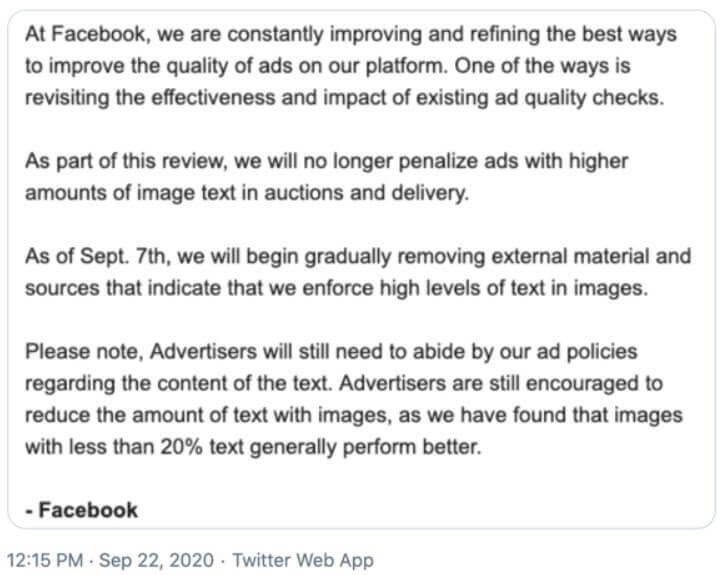 The first clue was the removal of the overlay tool. The Facebook Ads team changed the official documentation as well so that the usage of 20% or less in your image ads is now only a ‘best practice’ suggestion, not a demand.

The official announcement from Facebook is yet to come, though the page About Text in Ad Images has been updated.

In an attempt to widen their user-base and tap into new potential markets, Microsoft Ads is adding a new batch of nifty features, including the integration of LinkedIn Ads Targeting for search ads. This was a highly anticipated feature and is now finally available to advertisers, but only in the following countries: US, CA, UK, AU, FR, and DE.

LinkedIn Profile targeting enables marketers to track down just the right audience for their projects, increasing their chances of optimizing conversions.

Dynamic Remarketing allows advertisers to target buyers based on the products and/or services they’ve already purchased, considered purchasing, or merely browsed. This concept is not too groundbreaking as it has been used by other social giants like Facebook, Instagram, Google, etc for years.

In-Market Audiences is now available for English, French and German markets. This feature helps you optimize targeting for your search campaign and boost your conversion rates across verticals such as Apparel, Auto, Financial Services, Home & Garden, Travel and many more.

Starting from November 2020, GoogleBot is starting to crawl (certain) websites over HTTP/2 – a next-generation HTTP that features improved architecture and other handy upgrades.

The upgraded architecture of HTTP/2 is reported to be faster, more efficient, and more robust in comparison to its predecessor, while it will also improve upon certain old features and add new ones for clients and servers.

According to Google, the main goal of this upgrade is to allow for a more efficient crawling process, especially when it comes to server and resource usage:

We suggest you visit this SEJ article and find out read more about how HTTP/2 crawls websites.

After Instagram’s recent rollout of “Reels,” YouTube is the next major platform to introduce their take on the short-video-format-based content.

Somewhat expectedly, Shorts is a platform designed for creating and sharing short-form videos that are up to 15 seconds in length. It first rolls out in India and offers a “handful of new creation tools,” according to Chris Jaffe, YouTube’s VP of product management. The team behind Shorts is planning on adding more options and tools in near future.

“This is an early version of the product,” says YouTube, “but we’re releasing it now to bring you — our global community of users, creators and artists — on our journey with us as we build and improve Shorts.”

Much like it is the case with TikTok, the new app utilizes a multi-segment camera to allow users to edit multiple video clips together. It also offers a music library to its users who can add backup tracks to their video content.

Time will tell if the new YouTube app will be capable of tapping into a substantial portion of TikTok’s market.

With certain changes detected in Spotlight Search on iOS and iPadOS 14 beta, along with a major Applebot support page update and a considerable surge in recent AppleBot crawling – some marketers are predicting that Apple is likely working on its own search engine.

The relationship between Google and Apple thus far considering this matter was based on Google reportedly paying Apple billions of dollars to remain the default search engine on all Apple devices. Up until July 2020 that is, which is when the deal has come under the attention of the U.K. regulators.

There’s also another hint that this scenario is likely to take place as new search engine-based jobs have been announced by Apple. And with its Spotlight Search is now bypassing Google Search with iOS 14 beta, it seems that the company’s proprietary search engine will soon enter the market.

That’s it for this edition of monthly news recap. See you next time, and in the meantime, feel free to check out our blog for more informative and useful articles from the industry we call digital marketing.